On Saturday, April 25th, the Archdiocese will celebrate the ordination of 10 men to the diaconate (7 men for the Archdiocese as transitional deacons, one as a permanent deacon for the Archdiocese, and 2 for the Oratory of St. Philip Neri in Cincinnati) in a closed Mass celebrated by Archbishop Schnurr. While the public will not be able to participate in the Mass, please join us in praying for Michael Kapolka of St. Luke, Beavercreek, and his classmates as they enter their final days of preparation for their ordination.

Michael will be ordained with:

On Saturday, April 25th, the Archdiocese will celebrate the ordination of 10 men to the diaconate (7 men for the Archdiocese as transitional deacons, one as a permanent deacon for the Archdiocese, and 2 for the Oratory of St. Philip Neri in Cincinnati) in a closed Mass celebrated by Archbishop Schnurr. While the public will not be able to participate in the Mass, please join us in praying for Louis Jacquemin of St. Anne, Hamilton, and his classmates as they enter their final days of preparation for their ordination.

Louis will be ordained with:

On Saturday, April 25th, the Archdiocese will celebrate the ordination of 10 men to the diaconate (7 men for the Archdiocese as transitional deacons, one as a permanent deacon for the Archdiocese, and 2 for the Oratory of St. Philip Neri in Cincinnati) in a closed Mass celebrated by Archbishop Schnurr. While the public will not be able to participate in the Mass, please join us in praying for Edward Hoffman of Sacred Heart, Cincinnati and his classmates as they enter their final days of preparation for their ordination.

Edward will be ordained with:

On Saturday, April 25th, the Archdiocese will celebrate the ordination of 10 men to the diaconate (7 men for the Archdiocese as transitional deacons, one as a permanent deacon for the Archdiocese, and 2 for the Oratory of St. Philip Neri in Cincinnati) in a closed Mass celebrated by Archbishop Schnurr. While the public will not be able to participate in the Mass, please join us in praying for these men as they enter their final days of preparation for their ordination.

Today, we are particularly praying for Mr. Aaron Hess who is a son of St. Mary parish in Philothea. He will be ordained with his brothers:

Congratulations to our New Deacons!
May 3rd, 2019 by Wayne

This past Saturday, April 27th, 18 men were ordained by Archbishop Schnurr at the Cathedral of St. Peter in Chains in Cincinnati, to the diaconate. Fifteen of these men will be permanent deacons and serve the people of their home parish from this day forward. The remaining three were ordained as transitional deacons and will, by the grace of God, be ordained priests next Spring. Thanks to the Catholic Telegraph and the good work of the communication office of the Archdiocese we are excited to share with you a beautiful recap of the ordination ceremony!

Don’t miss the beautiful photos from the day, found at The Catholic Telegraph.

Posted in Call to Holiness, Culture of Vocations, Discernment | No Comments » 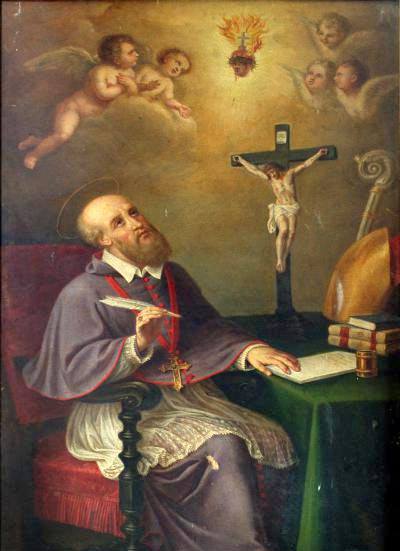 Today is the Feast of St. Francis de Sales, a patron of the Archdiocese of Cincinnati and one of the greatest spiritual writers in the history of the Church. His most popular writing is his Introduction to the Devout Life which was written for the lay members of the Church to grow in holiness and to devote their entire lives for the love and at the service of God, our creator.

I have been thinking quite a bit about the term, “vocation”. As Luke Burgis and Dr. Joshua Miller, PhD point out in their book, Unrepeatable, we are each called, particularly, in our own way, for a definite purpose. This purpose is not given to any other person ever created. It is the very reason for our existence. God creates us out of love because he wants to share His love to the world through us! Therefore, in living out our lives, it is important for us determine our definite purpose and courageously express God’s love in a way that only we can!

When God created the world He commanded each tree to bear fruit after its kind;and even so He bids Christians,–the living trees of His Church,–to bring forth fruits of devotion, each one according to his kind and vocation. A different exercise of devotion is required of each–the noble, the artisan, the servant, the prince, the maiden and the wife; and furthermore such practice must be modified according to the strength, the calling, and the duties of each individual. I ask you, my child, would it be fitting that a Bishop should seek to lead the solitary life of a Carthusian? And if the father of a family were as regardless in making provision for the future as a Capucin, if the artisan spent the day in church like a Religious, if the Religious involved himself in all manner of business on his neighbour’s behalf as a Bishop is called upon to do, would not such a devotion be ridiculous, ill-regulated, and intolerable? Nevertheless such a mistake is often made, and the world, which cannot or will not discriminate between real devotion and the indiscretion of those who fancy themselves devout, grumbles and finds fault with devotion, which is really nowise concerned in these errors. No indeed, my child, the devotion which is true hinders nothing, but on the contrary it perfects everything; and that which runs counter to the rightful vocation of any one is, you may be sure, a spurious devotion.

So we see, as St. Francis puts it, even our devotion to God is going to be different for each individual, and yet, it is through our individual devotion that we come to express the very love of God in this world today. Through prayer and undivided devotion to God above all, we can come to understand our very being and the mission for which we have been created. Many of us will live out that mission as lay men and women, but for others, their missions will lead them to serve the world as priests and consecrated religious. Do we have the courage to become the person God has created us to be? Are we truly devoted to the Lord and his will for your life?

On this, the Feast of St. Francis de Sales, let us take more time to truly explore our devotion to God and to learn from one of the great spiritual masters of our Church.

Posted in Call to Holiness, Culture of Vocations, Discernment, Saints, Spirituality | No Comments »

Today is the feast of St. Alphonsus Liguori, the patron saint of those discerning the call to the priesthood. Born in 1696, as a young man, Alphonsus wanted nothing more than to please his father and to do whatever his father asked of him. That meant that instead of going to school he was privately tutored at home and received a doctor of law at the young age of 16 while also maintaining a good life of prayer and devotion to God. Soon, however, he started having success in the courtroom and he followed the life that his success offered. He began to neglect his relationship with God but still made his father proud by never losing a case in the first 8 years of his career. However, the ways of the world lost all their luster when he emphatically lost a case for the first time. He spent three straight days without food and, in a moment of clarity and grace, decided never to practice law again. Instead he returned to his life of prayer and service and it was in the midst of this service that Alphonsus heard God ask him to serve as His priest. Immediately, Alphonsus promised the Lord that he would be a priest, even though he knew it would displease his father. Three years later, at the age of 30, Alphonsus was ordained a priest and missionary and later founded the Redemptorist order.

While a priest, Alphonsus became a prolific writer and a sought after missionary preacher. He traveled many miles and preached to whomever needed to hear the word of God. Undoubtedly, this talented lawyer had truly found the path God had planned for him in his life! While many of his writings and sermons are very well known (his Stations of the Cross among the most popular), one of the most important works of his for those discerning the priesthood is his writings “On the Dignity and Duties of the Priest.” While the work is lengthy, we provide here the 12 maxims he gave himself while in formation for the priesthood. We hope that they can be of some guidance to you as you continue in your discernment. Recognize in these statements the importance St. Alphonsus placed on each of these items. While not all of these will make sense in your own daily life, given your current state in life, we encourage you, nonetheless, to take some time to reflect on the importance you place on these. Perhaps they will help you see an area in your spiritual life that might need strengthening. St. Alphonsus Liguori, patron of discerners, pray for us!

1. The cleric should frequent the society of holy priests, to be edified by their example.

2. He should spend at least one hour daily in mental prayer, that he may live in fervor and recollection.

3. He should visit the Blessed Sacrament frequently, especially during the time of exposition.

4. He should read the lives of holy priests, that he may imitate their virtues.

5. He must cultivate a special devotion to the Virgin, the Mother and Queen of the clergy, and consecrate himself particularly to her service.

6. For the honor of the ecclesiastical state he must be most careful of his reputation.

7. He should flee from worldly conversation, and not be too familiar with the laity, especially women.

8. Seeing God in his Superiors, he must obey them, because such is the divine will.

9. He should be modest, but without affectation, severity, or fastidiousness; and he should always wear the cassock and tonsure.

10. He should be quiet and gentle at home, exemplary in class, and edifying in church, especially during the public offices.

11. He should confess every eight days, and communicate still oftener.

12. He should live free from sin, and practise every virtue.